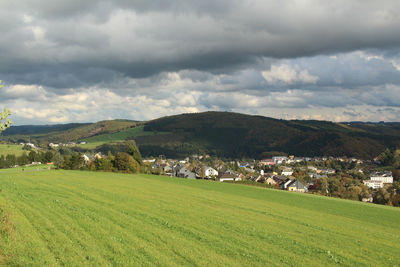 Wiltz is a small City in the Ardennes of Luxembourg, capital of the Canton of Wiltz, situated on the banks of the River Wiltz.

Despite being bestowed city status, Wiltz has a population of just under 5500 people. This may seem a bit large by LBW venue standards, but the city centre is very compact, with all the bars, restaurants, hall, shops and accommodations located in a relatively small area.

Wiltz is situated in the valley of the meandering river Wiltz, with the town centre located next to the strategically situated castle on top of the hill. This means that what may look like a 300 meter walk on the map may also involve 50 meters of ascent.

Wiltz is located in the Ardennes.

“The Ardennes (/ɑrˈdɛn/; Luxembourgish: Ardennen; also known as Ardennes Forest) is a region of extensive forests, rough terrain, rolling hills and ridges formed by the geophysical features of the Ardennes mountain range”1)Blatantly borrowed from Wikipedia.

The varied terrain of the Ardennes makes it an interesting area with many possibilities.  There are both gentle and challenging hike routes, cycling and mountain biking routes, lakes, rivers, and various other ways to spend your time.

Places of Interest for LBW 2015 in Wiltz.